Forces of illness and its Healing

Forces of illness and its Healing 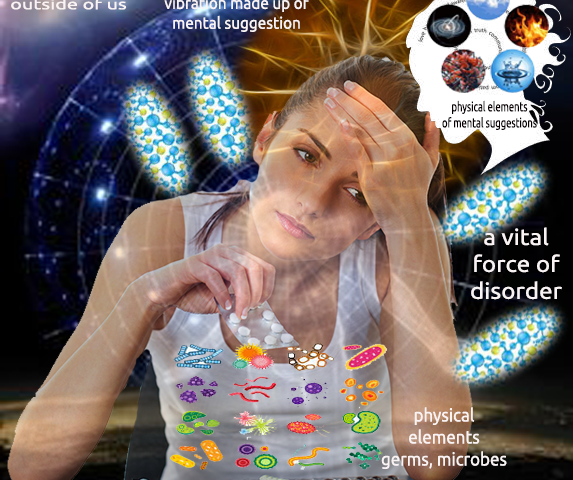 Illness comes from outside of us.  Illness is a kind of vibration made up of a mental suggestion, a vital force of disorder and certain physical elements which are the materialization of the mental suggestion and the vital vibration. And these physical elements can be what we have agreed to call germs, microbes, this and that and many other things. 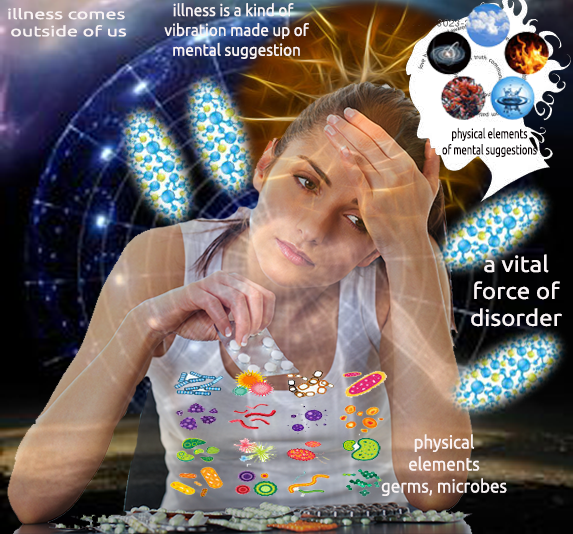 People have many senses which are asleep. They are terribly tamasic.  If all the senses they possess were awake, there are many things they would perceive, which can just pass by without anyone suspecting anything.

For example, many people have a certain kind of influenza at the moment. It is very wide-spread. Well, when it comes close, it has a special taste, a special smell, and it brings you a certain contact (naturally not like a blow), something a little more subtle, a certain contact, exactly as when you pass your hand over something, backwards over some material… You have never done that? The material has a grain, you know; when you pass your hand in the right direction or when you pass it like wave, it makes you… it is something that passes over your skin, but naturally, it doesn’t come like a staggering blow. It is very subtle but very clear.

If you could see that kind of dance, the dance of vibrations which is there around you all the time, you would see, would understand well, then you are protected.

For example, in a game, when you play, it is like vapour of heat, and then it is like the vibrations of a point, it goes on increasing, increasing and increasing until suddenly, crash!… an accident. And it is a collective atmosphere like that;  you are in the midst of a game—basketball or football or any other—we feel it, see it, it produces a kind of smoke around you (those vapours of heat which come at times, something like that), and then it takes on a vibration like that, like that, more and more, more and more, more and more until suddenly the equilibrium is broken: someone breaks his leg, falls down, is hit on the mouth by a ball, etc. And one can foretell beforehand that this is going to happen when it is like that. But nobody is aware of it.

Yet, even in less serious cases, each one of you individually has around him something which instead of being this very individual and very calm envelope which protects you from all that you don’t want to receive…, your receptivity becomes deliberate and conscious, otherwise you do not receive; and it is only when you have this conscious extremely calm atmosphere, when it comes from within (it is not something that comes from outside), it is only when it’s like this that you can go with impunity into life, that is, among others and in all the circumstances of every minute…

Otherwise if there is something bad to be caught, for example, anger, fear, an illness, some uneasiness, you are sure to catch it. As soon as it starts doing entry it is as though you called all similar vibrations to come and get hold of you.

What is to be wondered at is the unconsciousness with which men go through life; they don’t know how to live, there’s not one in a million who knows how to live, and they live like that somehow or other, limping along, managing, not managing; and all that for them, bah! What is it? Things that happen.

To cure a disorder

The spontaneous way of proceeding is to sweep away everything, to make it all completely empty and then to turn towards something up above and to keep absolutely silent and immobile.  Yes, that is the best means, nothing can be better.

If one could only do that!… From all sides illness comes like waves attacking.

Finally, that the confusion is there to teach us how to live from day to day, that is to say, not to be preoccupied with what may happen, what will happen, just to occupy oneself day by day with doing what one has to do. All thinkings, pre-plannings, arrangements and all that, are very favourable to much disorder.

To live almost minute by minute, to be attentive only to the thing that is to be done at the moment, and then to let the All-Consciousness decide…. We can never know things even with the widest vision: we can know things only very partially —  very partially. So our attention is drawn this way and that, and still other things are there. By giving great importance to things dangerous and harmful, you only add strength to them.

When you are assailed by the vision of such disorder and confusion, you have to do only one thing, to enter into the consciousness where you see only one Being, one Consciousness, one Power — there is only a single Unity — and all this is taking place within this Unity. And all our insignificant visions and knowings and judgments and… all that is mere nothing, it is microscopic in comparison with the Consciousness presiding over All. Therefore, if one had the least sense of the reason why separate individualities existed, one would see that it was only for allowing aspiration, the existence of aspiration, of this movement of self-giving and surrender, trust and faith. And it is this that is the very reason why individuals were built up; and then, for you to become that in all sincerity and intensity… it is all that is needed.  It is all that is needed, it is the only thing, the only thing that stays; all the rest… phantasmagoria (a sequence of real or imaginary images like that seen in a dream).

That state… I know, by experience, that it is the state in which one can change the world. One becomes a sort of instrument — that is even unconscious of being an instrument — but which serves the flow of forces through the instrument to project the forces (in all directions radiating from the instrument as the centre). The brain is altogether, altogether too small, is it not? Even when it is very big, it is too small to be capable of understanding; that is why there is this blank in the mind and the thing happens.

And then you perceive that with regard to the needs of the little life you represent, it automatically comes to pass and you automatically do at every minute just what you have to do without… without calculating, without speculating, without deciding, nothing; it is like this (same gesture of flow through the instrument).

That if something is upset in the body (a pain, a discomfort or something that does not function properly), when you have gone through that state, it leaves you — it goes away, disappears. Acute pains even disappeared completely, one does not know how! Ah! gone — like that, otherwise it remains.  Hence you have to be more and more aware of the consciousness.