Acceptance of Pain and Disease 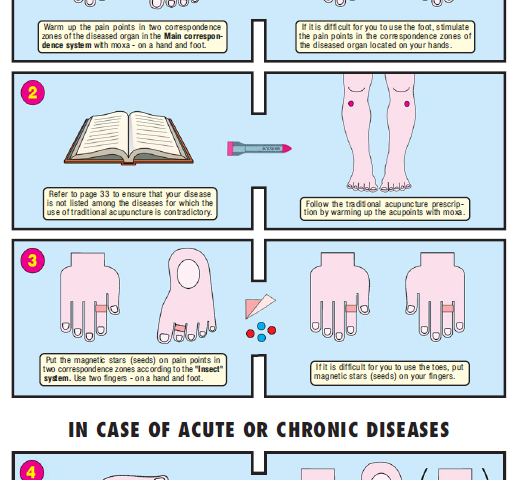 The prescription guide consists of:

To treat yourself using the guide, you have to specify the contents of the healing procedure and to accomplish it using the correspondence zones maps of the affected organ, and when necessary you will also have to include the traditional acupuncture prescription published on the same page.

In this particular case you have two choices:

The first choice is to build the contents of the healing procedure by yourself, based on the information presented so far, the correspondence zones maps, the traditional acupuncture prescriptions and using your own intelligence.

The second one is to use the standard healing proce­dure. 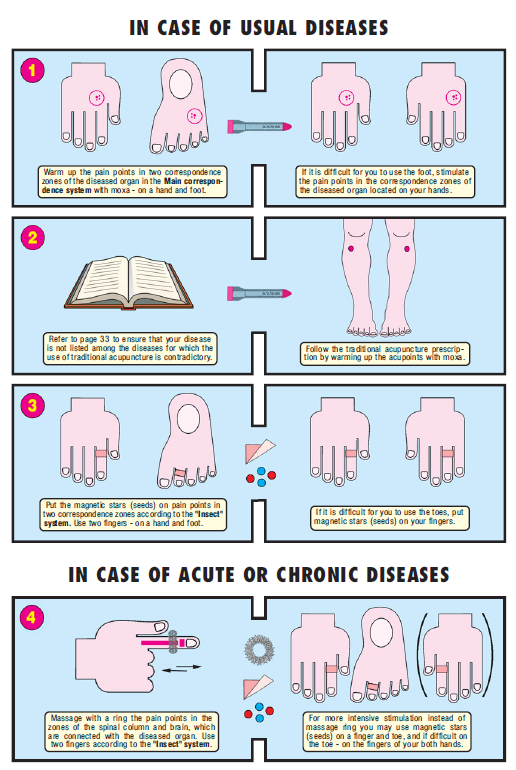 Let’s remind in brief what you have to do in case you decide to build the contents of the healing procedure by yourself (for details refer to the corresponding section).

1. You have to select one to four correspondence zones of the diseased organ in which you have to look for pain points or areas.

Make the choice considering the basic principles used for selection of correspondence zones.

It is necessary to notice that despite the great effec­tiveness of those zones located on the feet, due to the bet­ter comfort and the easier definition of the correspondence zones the hands are used more often in the real practice. Primary and secondary correspondence zones are com­bined on both of the hands.

Besides, sometimes the use of secondary instead of the primary zones is more comfortable. Such an example is the case with the zones of the blade-bones in the Main cor­respondence system. The secondary zones of the blade- bones are located over a bone thus the pain points there are easier to find. That is why they are used more fre­quently.

2. In case of more serious and refractory chronic dis­eases you have to include pain points in additional cor­respondence zones.

These are the correspondence zones of the spinal col­umn, the brain and internal organs, directly related to the diseased organ.

3. You have to take a decision whether you will use mirrored pain points or not.

Here you have to decide whether you will use mirrored points, besides the main su jok points and if yes, which one – horizontal or vertical. You won’t make a mistake if you include them.

4. You have to select a stimulation method of the pain points and areas.

The stimulation methods are divided conditionally in two categories:

These are seeds, magnetic stars, magnets.

You’d better combine methods of stimulation from both of the categories.

5. According to the seriousness of the disease, use your own judgment to decide whether to include the tra­ditional acupuncture prescription.

At this point don’t forget that the traditional acupuncture prescriptions might also be used independently.

If the making up of the healing procedure hampers you, use the standard healing procedure which we suggest in the “Prescriptions” section in the images below.  It has been tested many times and the results have been excellent, including the cases of serious chronic diseases.

In some cases it is possible to feel no improvement at the time of the healing course and the disease can fade away suddenly, several days or weeks after its finish. The reason is that the stimulation upon the correspondence zones gives a push for the healing changes, which some­times accelerate very slowly and can not be felt in the term of ten days which are needed for the procedures.

NOTES AND ADVICES ON THE CORRESPONDENCE ZONES MAPS

For each correspondence zone in the Main system we’ve developed a separate map.

We have shown the correspondence zones in the “Insect” system summarized on a single finger, as they are located in the same way on all fingers and toes. Slightly dif­ferent is the case with the thumbs in the “Insect” system. In contrast to the other fingers, the thumbs have two phalanges – distal (first) and proximal (second). The system is project­ed over the first phalanx (the head and neck zone) and the second phalanx (thorax zone). The role of the third phalanx is performed by the first bone before the wrist for the hands, and the first bone before the foot for the feet (stomach zone).

The determination of the correspondence zones by the “Insect” system might hamper and confuse you. For that reason use the remaining four fingers and toes. They are fairly enough.

We have marked the correspondence zone in the fol­lowing manner:

Keep in mind that in some cases the contour on the map doesn’t outline the exact borders of the correspon­dence zone. For example the stomach zone may be smaller for some people and larger for others according to the size of the stomach itself. That is why you must also search for the pain points around the borders outlined on the map.

NOTES AND ADVICES ON THE TRADITIONAL ACUPUNCTURE PRESCRIPTIONS

We have included mostly ancient Chinese prescrip­tions from traditional acupoints as well as some popu­lar contemporary prescriptions recommended by com­petent acupuncture specialists. These prescriptions can be used in parallel with the su jok therapy or inde­pendently.

We’ve made our best to collect combinations, consisting of acupoints whose location can be determined easily by inexperienced people.

Keep in mind that our manual is for self-treatment, so we haven’t included points on the back which can not be stimulated independently, without someone’s help (despite their high effectiveness).

The basic measuring units by the location of the acu­points are:

In the illustrations these measuring units are shown by graphical pictograms.

When you use traditional acupuncture prescriptions don’t forget the following: 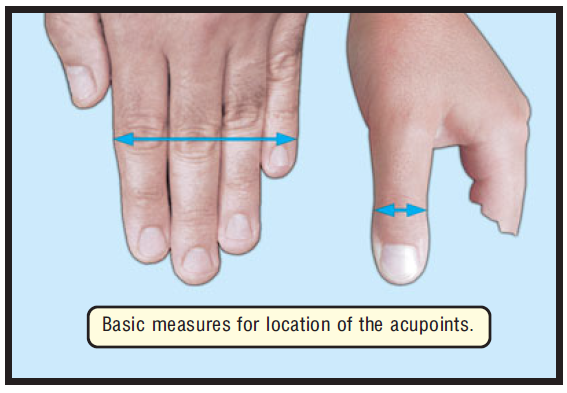 The standard healing procedure consists of two parts. The first one is performed in the case of the most usual diseases. The second part is added to the first one in cases of more acute or chronic diseases.

IN CASE OF USUAL DISEASES

To do this it is necessary to open the prescription guide on the corresponding page so you can become acquainted how the diseased organ’s correspondence zones are located on your hands and feet. You will have an exact idea of their location if you get a mental picture of your hand or foot in the place of the illus­tration.

After that outline the zones using a marker and go over them with the diagnostic probe. Mark the open pain points and warm them up with moxa.

It is advisable to use the primary correspondence zones – one on hand and one on foot (at the diseased organ’s side).

When the organ is located on the body axis, alternate the hands and feet in the separate procedures. For example: left hand – right foot in one procedure and right hand – left foot in the next one.

If it’s difficult for you to use the feet then use your both hands in each procedure.

Depending on the seriousness of the disease you may stimulate the su jok points with massage, needles or hot needles instead with moxa.

You will find the traditional acupuncture prescription on the page with the correspondence zones of the dis­eased organ. The location of one of the acupoints used in the prescription is shown there. You’ll find the other with the help of the references to other pages.

The “Insect” system is located likewise on all fingers and toes. For that reason there is a map of only one finger on the page containing the diseased organ’s correspon­dence zones. You will get an exact idea of the diseased organ’s correspondence zone location if you form a mental picture of the finger you want to use in the place of the illustration.

The magnetic stars (seeds) are put for 24 hours, till the next procedure with moxa when they are relocated on other two fingers.

When the organ is located on the body axis alternate the fingers and the toes in the separate procedures. Left hand – right foot in one procedure, right hand – left foot in the next.

If you feel it’s difficult for you to use the toes, use only the fingers.

We strongly advise you not to ignore the magnetic stars (seeds). Their inclusion in the procedure is often a key to the fast overcoming of the disease.

The healing effect can increase vastly if you also put magnetic stars (seeds) on the mirrored pain points. 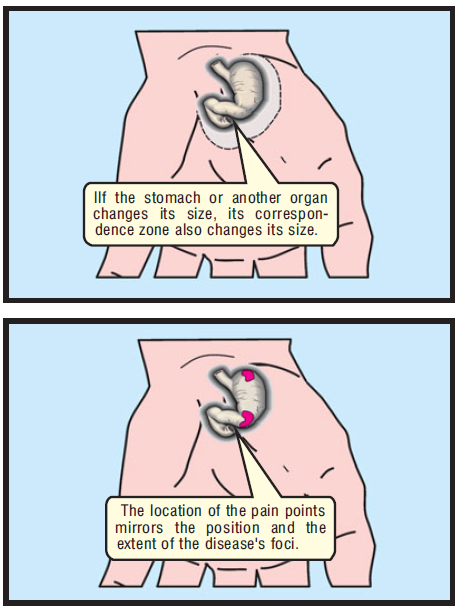 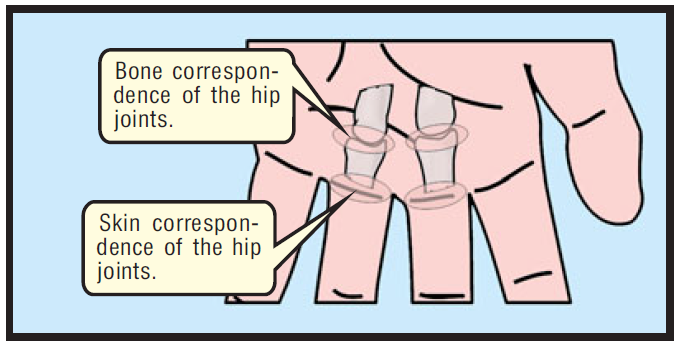 IN CASE OF MORE REFRACTORY, ACUTE AND CHRONIC DISEASES

Massage intensively the fingers with a massage ring by concentrating the massage in the areas in which you’ve found pain points. Massage each area on the two fingers 2­3 times a day for 2-3 minutes. On the next day use other two fingers.

If you experience difficulties with the location of the points just do a general massage of the fingers with the ring emphasizing on the areas in which you feel pain.

For more intensive stimulation instead with the massage ring you might influence on the open pain points with the magnetic stars or seeds.

This is a standard procedure which is effective for most of the diseases. However, you might “customize” it in accordance with the particular disease’s characteristics.

For example; if you want a cyst to disappear, it is good to use a hot needle. You can also include ring-shaped mag­nets or magnetic pointers, which are very effective.

For the number and frequency of the procedures, which you have to perform, read above. 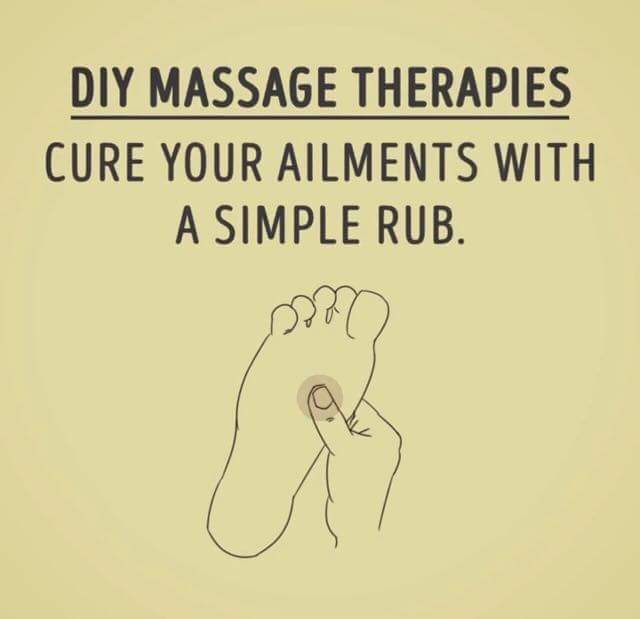 Do It Yourself Massage