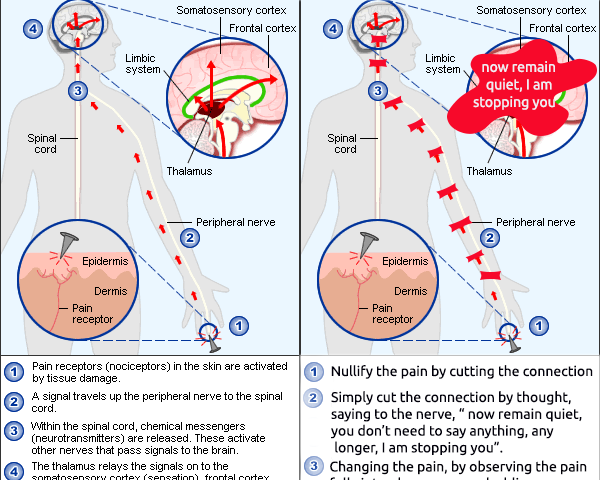 The first thing and the most indispensable is to nullify the pain by cutting the connection. You see, one becomes conscious of the pain because it is there.

For example, you have cut your finger, there’s a nerve that has been affected, and so the nerve quickly goes to tell the brain, up there, that something has happened which is wrong, here. That is what gives you the pain to awaken your attention, to tell you: “You know, there’s something wrong.” Then the thought immediately feels anxious: “What is wrong? Oh! How it hurts”, etc., etc. — then returns to the finger and tries to arrange what is not yet destroyed. Usually one puts a small bandage. But in order not to have the pain, if it hurts very much, you must quite simply cut the connection by thought, saying to the nerve, “Now remain quiet, you have done your work, you have warned me, you don’t need to say anything any longer; ploff! I am stopping you.” And when you do it well, you suffer no longer, it is finished, you stop the pain completely. That is the best thing. It is infinitely preferable to telling yourself that it is painful. 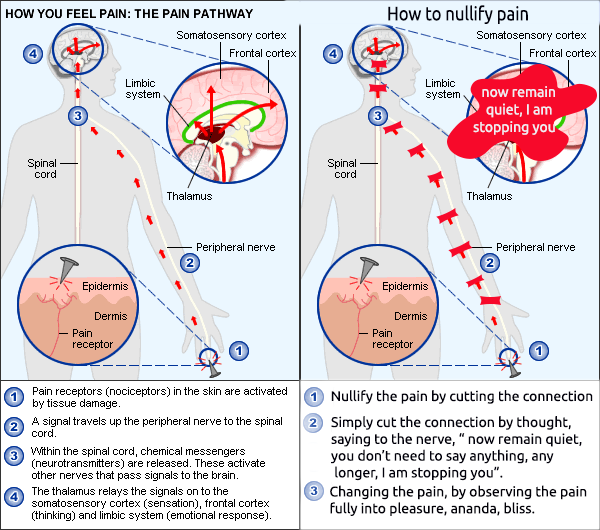 There was a boy who had an ingrowing nail — an ingrowing nail means a nail which enters the skin, it hurts very much when it is in the foot; it grows into the skin; so naturally, especially if one wears tight shoes, it hurts very much. Well, the boy started pressing his nail,  with the idea that pain is simply an incapacity to bear certain intensities of vibrations, you see; so he went beyond the measure, and in fact he pressed, it hurt abominably at first, he pressed until his hurt was changed into a kind of pleasure, and this succeeded very well.

If you have some pain, and you give yourself much more pain still, then finally there’s a moment when you either faint away (people who are a little weak and not very enduring faint) or else it changes into pleasure; but this is not recommendable, but it can be done. A boy, who was twelve — who was doing that, and he was doing it very deliberately, very consciously. He had never heard of yoga but he had found it out all by himself. But this is not recommendable because his toe became worse. This didn’t make it better at all.

But  a very good method which consists in saying to the nerve, “Now you have done your job, keep quiet, you don’t need to tell me anything more”, is much better. One cuts it ( cuts the connection from pain to brain ) and then it’s over.

When one has a very bad toothache; a toothache hurts terribly because the nerve is quite, quite close to the brain, so it doesn’t lose its intensity on the way, it is very direct and hurts very much, the best way – in fact there’s no other – the best way is to cut it: “It is good, you have done your work, you told me that something was wrong there, that’s enough, don’t move now.” And one cuts, cuts it,  cuts the connection, it doesn’t transmit again. Naturally you must think of something else. If afterwards you start saying, “Do I still have the pain?…”

Pain is a degradation of an original Ananda…  Yes, but everything, everything is a degradation, pleasure also. Pleasure and pain are equally a degradation of Ananda.  Besides, the capacity for balance of the human physical consciousness is very small. If you have a pleasure which you push a little too far, whatever it may be, it immediately becomes a pain — whatever it may be. And there is always a place where one no longer knows whether it is a pleasure or a pain, it can as well be this or that. But wait a bit, eat something that’s too sweet and you will see the effect. At first you say that it’s very good, then suddenly it becomes something which… oh! it is almost unbearable. For everything it is like that, for everything. They are very close relations, you see.