After a severe heart-attack, .the heart sometimes stops beating and the patient. loses consciousness. Stopped respiration, an absent pulse and dilated pupils are the symptoms of cardiac arrest. The four-minute period after the heart has stopped beating is very critical and important. If the heart fails to beat again during those four minutes, the patient dies or his brain becomes permanently damaged. So instead
of passively waiting for the doctor, the person who is present near the victim should try to revive the victim’s heart.

First of all,  he should ascertain the fact that the patient’s unconsciousness is due to the heart having stopped beating and not due to some other cause.  He shouId then make the patient lie on a hard surface and elevate his legs with the help of pillows, a chair or a sofa. Then without wasting time he should strike a hard blow on the lower end of the patient’s middle breastbone. At times the heart starts beating again just with the blow. However, if it fails to beat again, it becomes necessary to undertake two things: external cardiac massage and mouth to mouth respiration. For this purpose the presence
of two persons excluding the patient is necessary.

Point 34 (H-6) :
This point lies on the above-mentioned line, half a thumb-width above the wrist-crease.

Point 36 (H-9) :
This point lies on the outer corner of the nail of the little finger.

Point 56 (P-6) :
This point is located at the centre of the forearm, two thumb-widths above the wrist-crease. 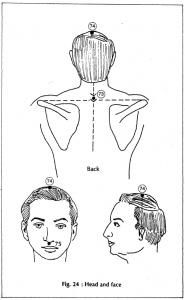